One of our neighbors, a local historian, writes a newspaper column: “Seattle: Then and Now.” We thought of him when we first hit Tulum on the Yucatán Peninsula. Several of our friends who travelled years ago to Tulum to see the magnificent Mayan ruins told us there was almost nothing there then. Apparently you reached Tulum by a dirt road and the town was all but non-existent. Well, times, they have a changed—some things for the better, and some for the worse. 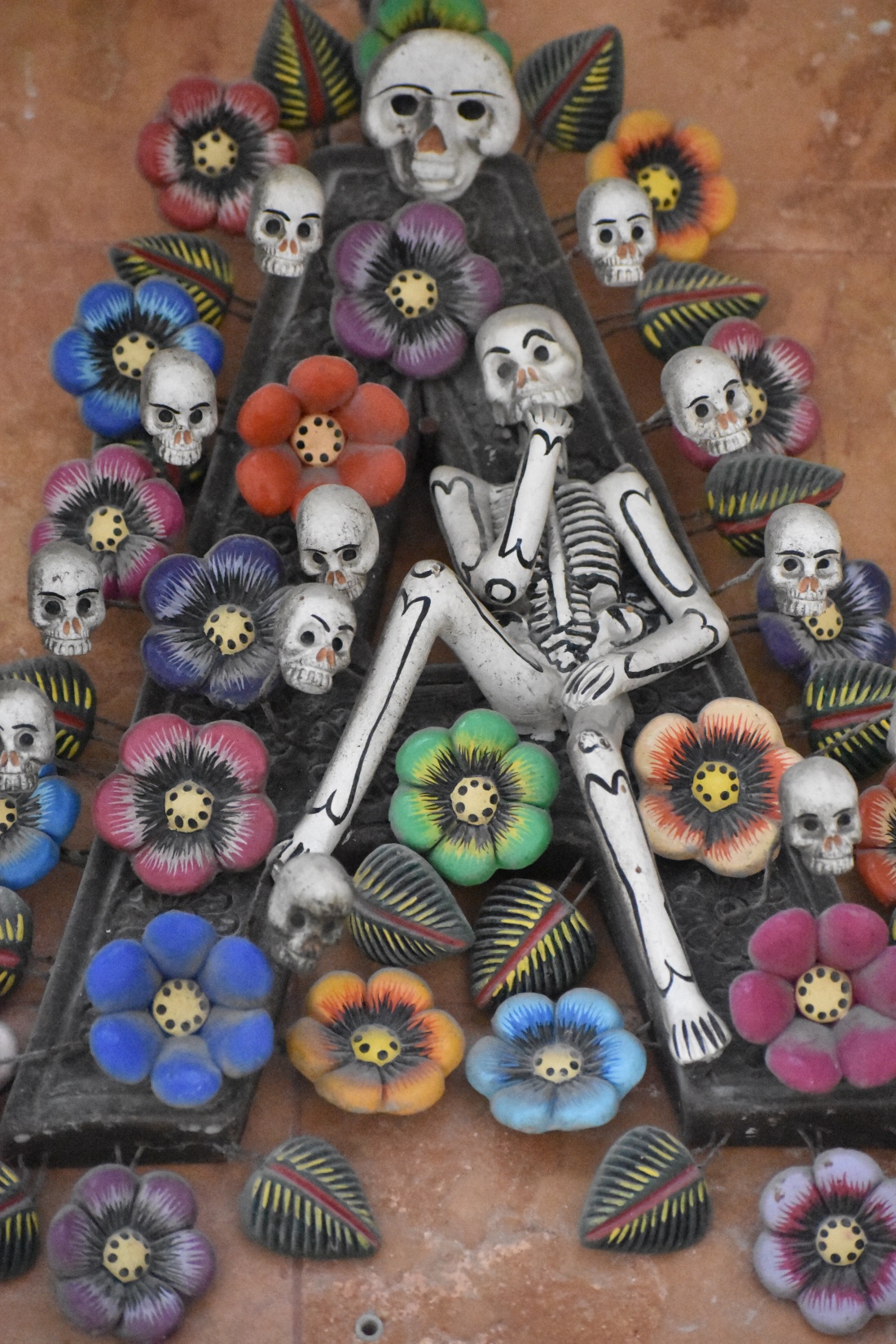 There is a now a modern, straight four lane divided highway running down the coast to Tulum full of cars, tour buses, trucks, motorcycles, three-wheelers and every other version of marginal motorized vehicles. Throw in a few pedestrians, a stray dog or two, hippie hitch hikers, road construction sites, massive & frequent but almost invisible speed bumps and a couple of police roadblocks and you get the picture.

Tulum itself is built around a couple mile stretch of this four lane highway with a grass meridian,  large sidewalks and frequent huge, broad speed bumps that also serve as pedestrian crossings.

On one side of the road there is bike lane which is often indistinguishable from the sidewalk….a  very dangerous proposition for pedestrians. On the other side the bike lane is still under construction, with gaps in the sidewalk offering another hazard to shoppers. 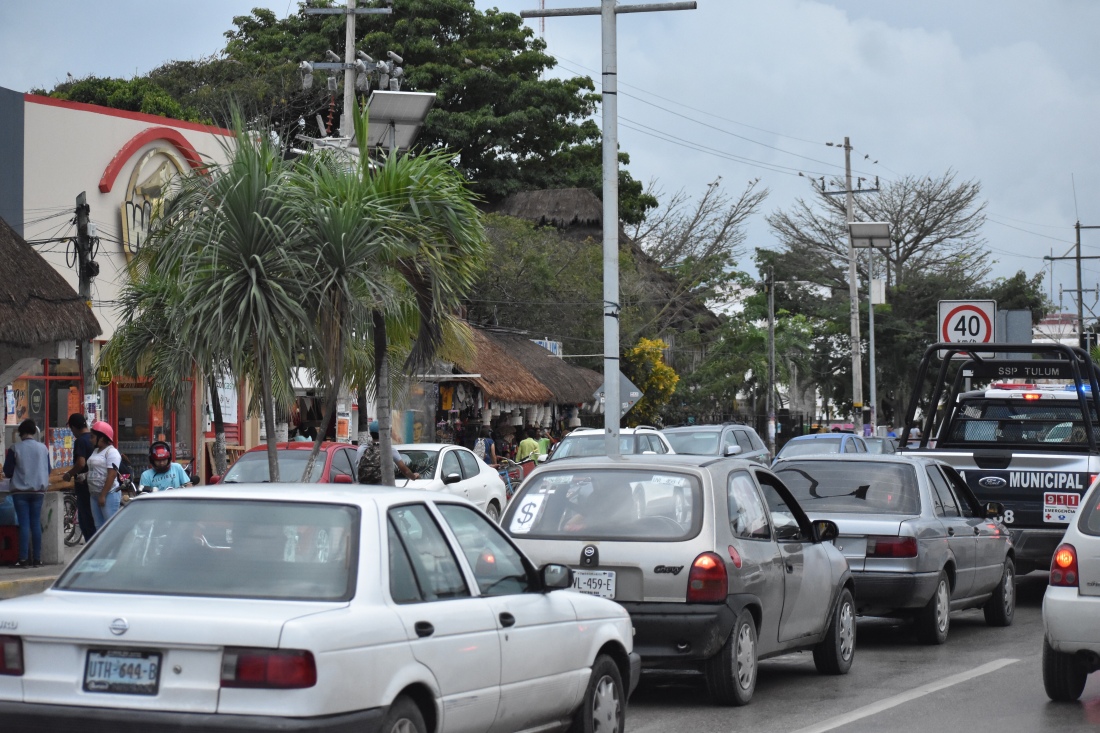 The street is lined with cheap clothing shops, high-end jewelry stores, souvenir stalls, restaurants, bars with pounding loud music. It seems to go on forever with a just public building every now and then to break up the string of tourist oriented businesses. 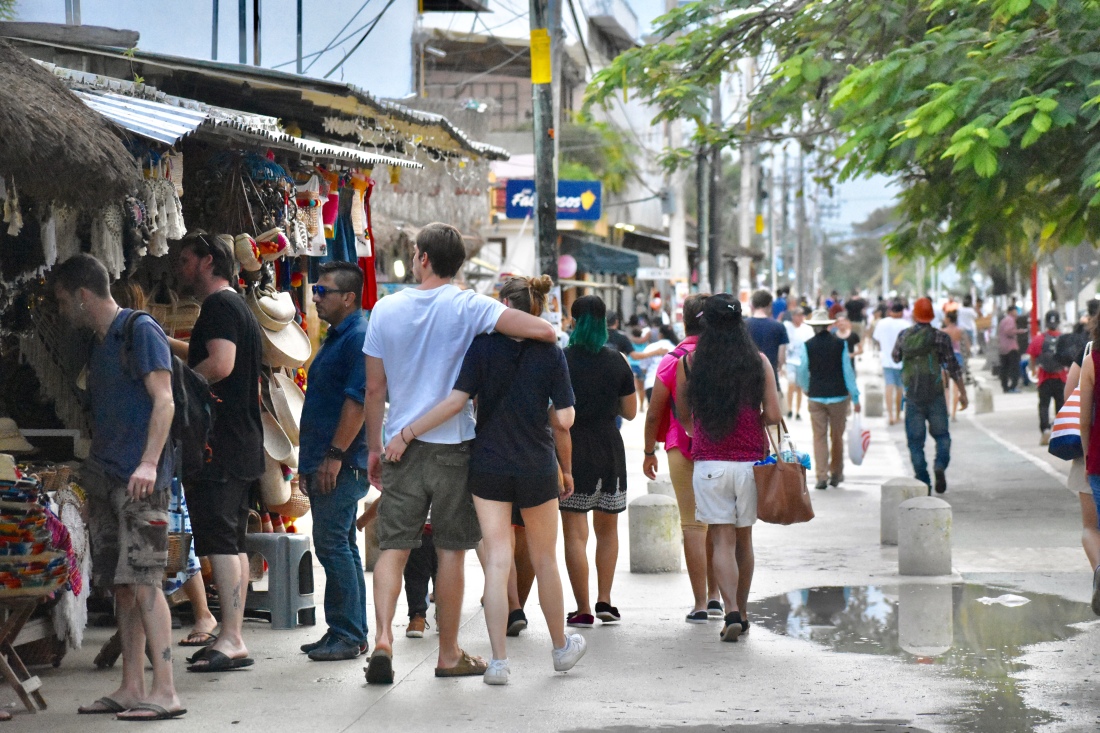 It’s a lively, fascinating combination of a small town experiencing growing pains and a collection of international travelers drawn to the Mexican vibe. Great for people watching and meeting new friends over a Margarita. 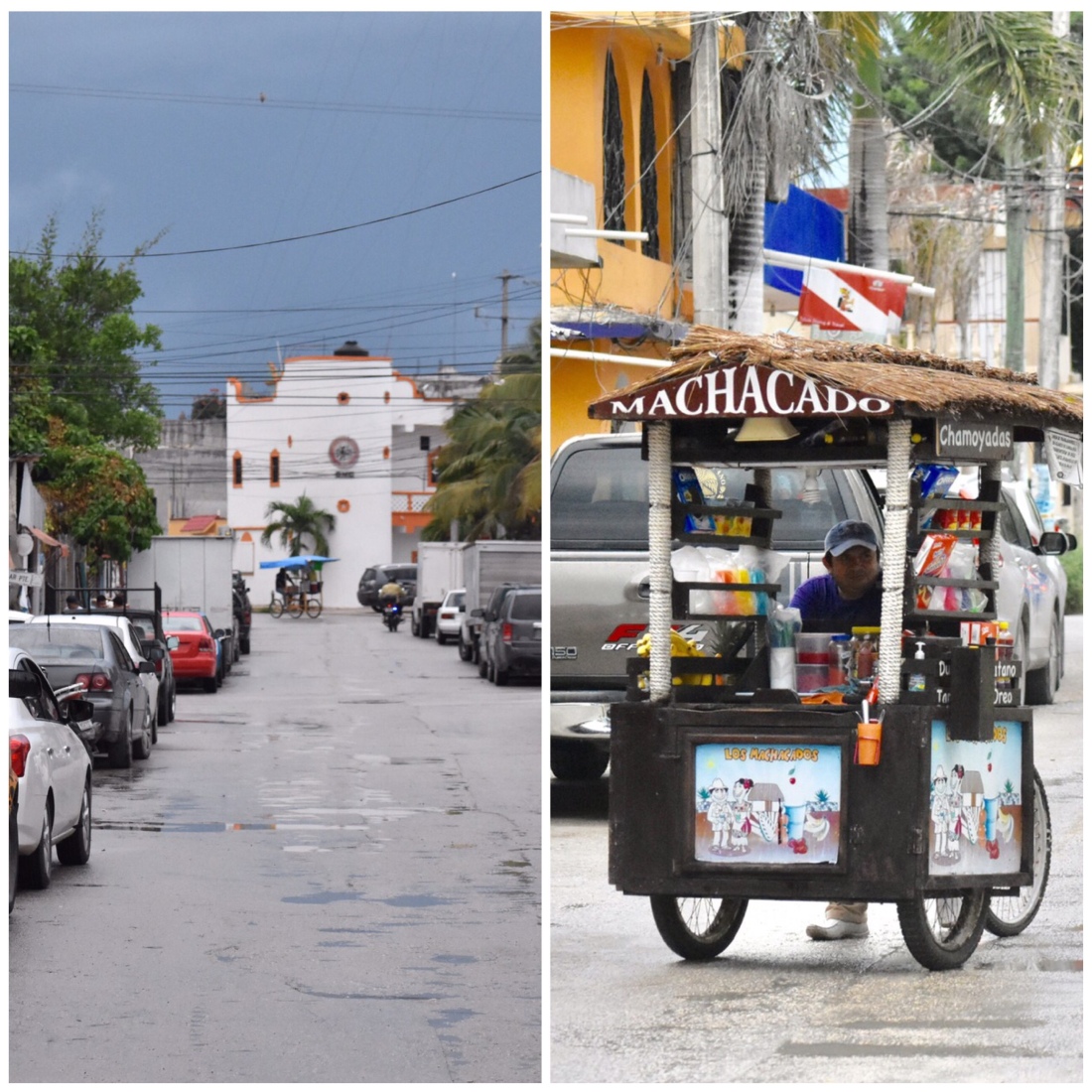 Off, off, off the main drag just as you get beyond the city limits are the tents and shacks right at the edge of the jungle.   Perhaps not your typical charming resort town, but fascinating to wander around and soak in.  By the way, the traffic is awful…chaotic, unpredictable. On the edge of town are two giant supermarkets—modern, selling everything from hardware to food.

So we drove down to the beaches and the hotel zone to get a look at the gorgeous beaches we’d seen in the guide books.  The coastal hotel zone now stretches about three or four miles and, unfortunately, the walls around the hotels and the jungle between them completely block any view of the water.  On the other side of the road is a collection of small tacky shops, restaurants of all sorts and a few high end boutiques, all crammed together. There is an incredible range of quality from shabby tent campgrounds, hotels made from cargo containers, bars decorated with old car parts to glamorous ultra modern “yoga” resorts, eco hotels,  swanky vegan restaurants, boutiques with expensive beach togs and jewelry.  The road is narrow and potholed with more invisible, mountainous speed bumps. There is virtually no parking except in a few pay lots (many with valets).  So add to the traffic, dozens of taxis and mini vans, a number of water trucks (no sewer or water lines here) coca-cola delivery trucks, hordes of bikini clad bicycle riders (often looking very unsteady), swimsuit clad walkers—plus the usual mix of hippie hitchhikers, fruit vendors, construction workers, and of course a few stray dogs— and people just popping out onto the roadway from out of nowhere. Even at 15 miles per hour, driving was a white knuckle experience for the driver and passengers.

This all would have been very discouraging but we finally decided to stop at hotel and restaurant because by some miracle there was a parking spot across the street.  Once you entered the hotel you stood just above the beach with a magnificent view of the long, white, picture-perfect beach.

Palapas, families playing in the water and bright colored traditional fishing boats taking snorkelers out to the reef dotted the shore.  Stunning!

Of course, the three lattes and a bottle of water ($10 by itself) we shared cost as much as the dinner we had last night in a nice restaurant but without the water view. Still worth it.

We are staying just outside of Tulum, in one of the largely gringo enclaves of condos, many of which are vacation rentals.   Dozens and dozens of yard signs line the broad smooth streets advertising new developments in the enormous planned community. Everywhere we saw small crews of men building by hand two and three story condo complexes.

No cement trucks or power tools here; it appears to all be done by hand. Sprinkled in between to walkways, green belts and buildings under construction were new restaurants and small shops waiting for customers.  Lots of bikers here, too, but at least there are well marked and separate lanes for the two wheelers.

Not a lot of soul, but a calm oasis of sorts close to all the action. 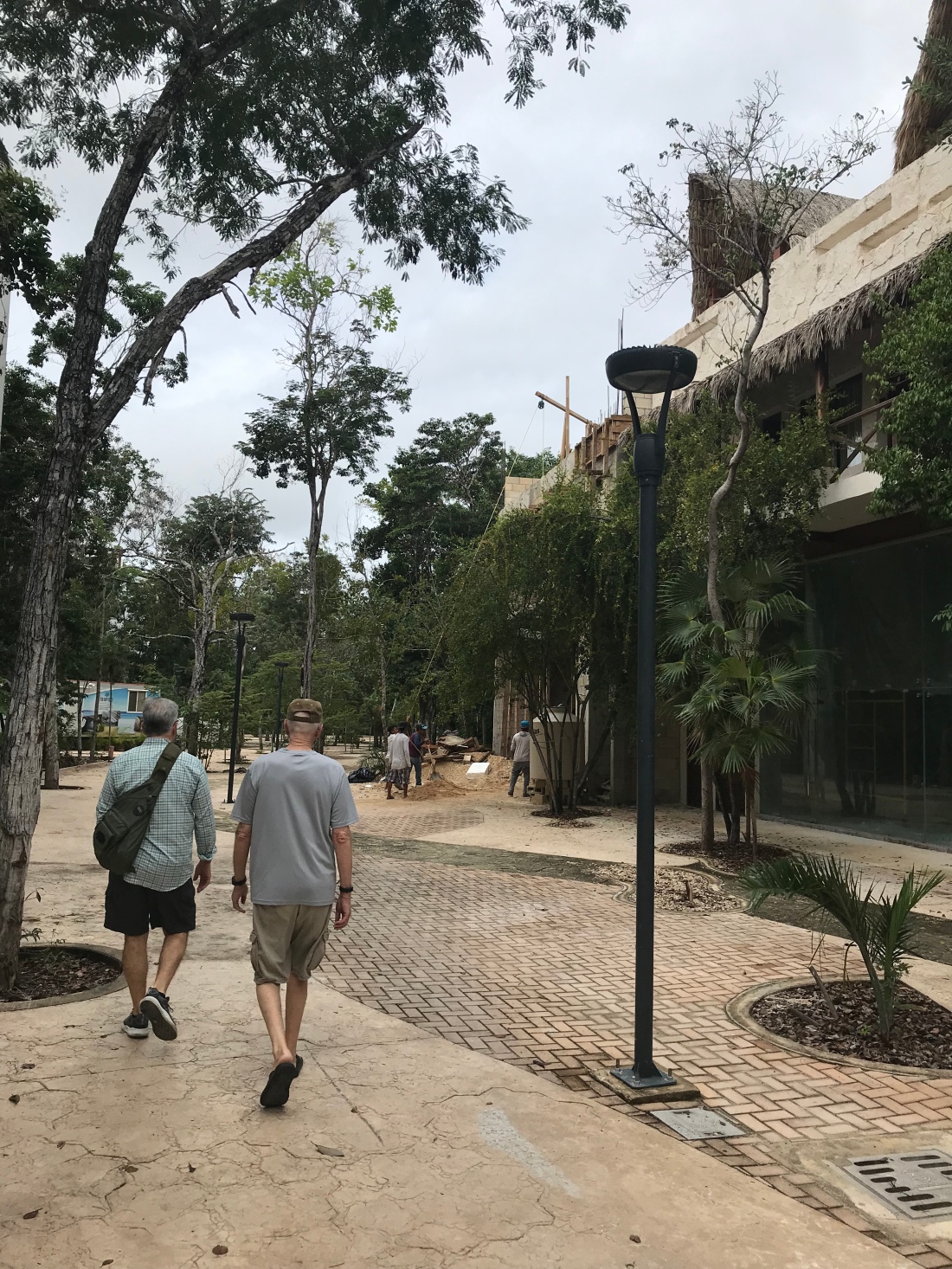