Riding a mule was never on my bucket list. But when it was proposed to the group of us, my thought was, “when will I ever have this chance again?” Quickly followed by, “just gonna do this once.” So my husband, my brother and I all raised our hands when they asked who wanted to go riding. We were on the eastern shores of the Baja Peninsula and the small boat cruise company had connections with a local family who would once a week gather enough mules to take groups off the boat riding. 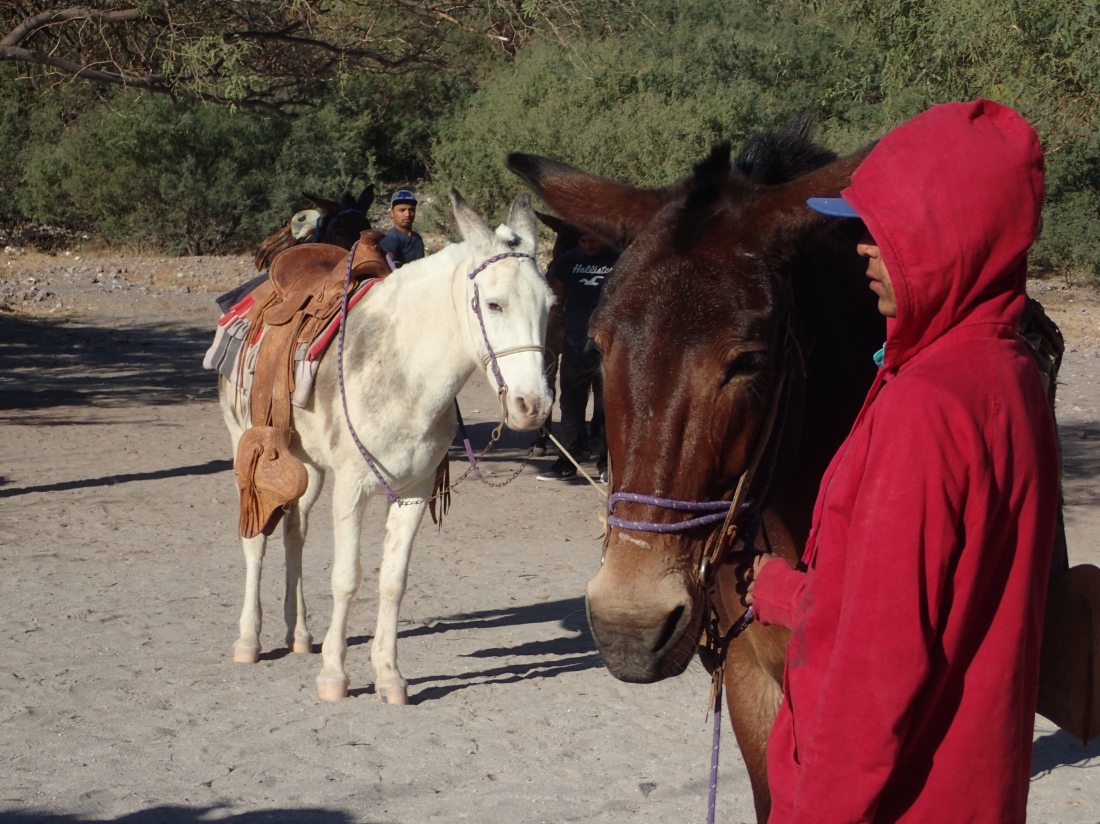 It started as a rather strange process, vaguely reminiscent of junior high dances or waiting to be picked for a kick ball game in grade school. The whole group of us stood in a line or rough semi-circle. The local vaquero stood in his cowboy boots beneath his cowboy hat, looking first at each mule as it was brought forward, then at the line of gringos and with a point of his finger and a nod of his head indicated who was to get on the mule. 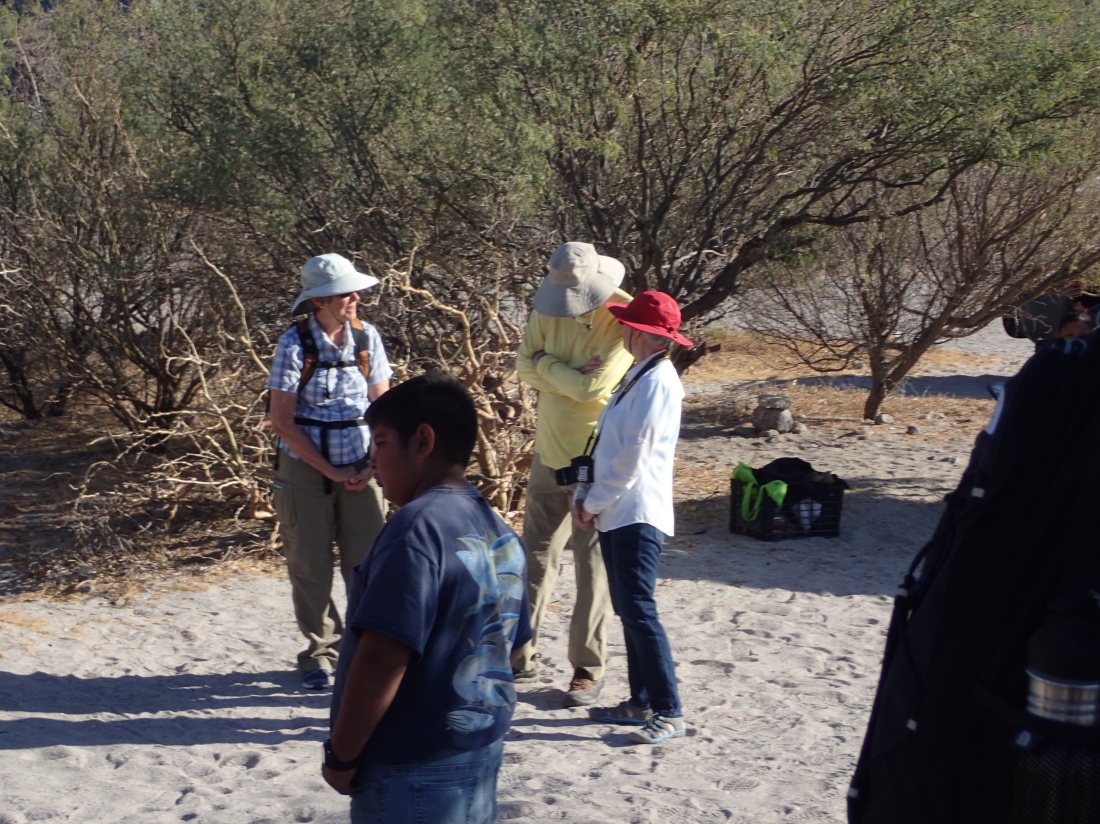 Peter went first. Was that a good thing or not? Malcolm and I were among the last. 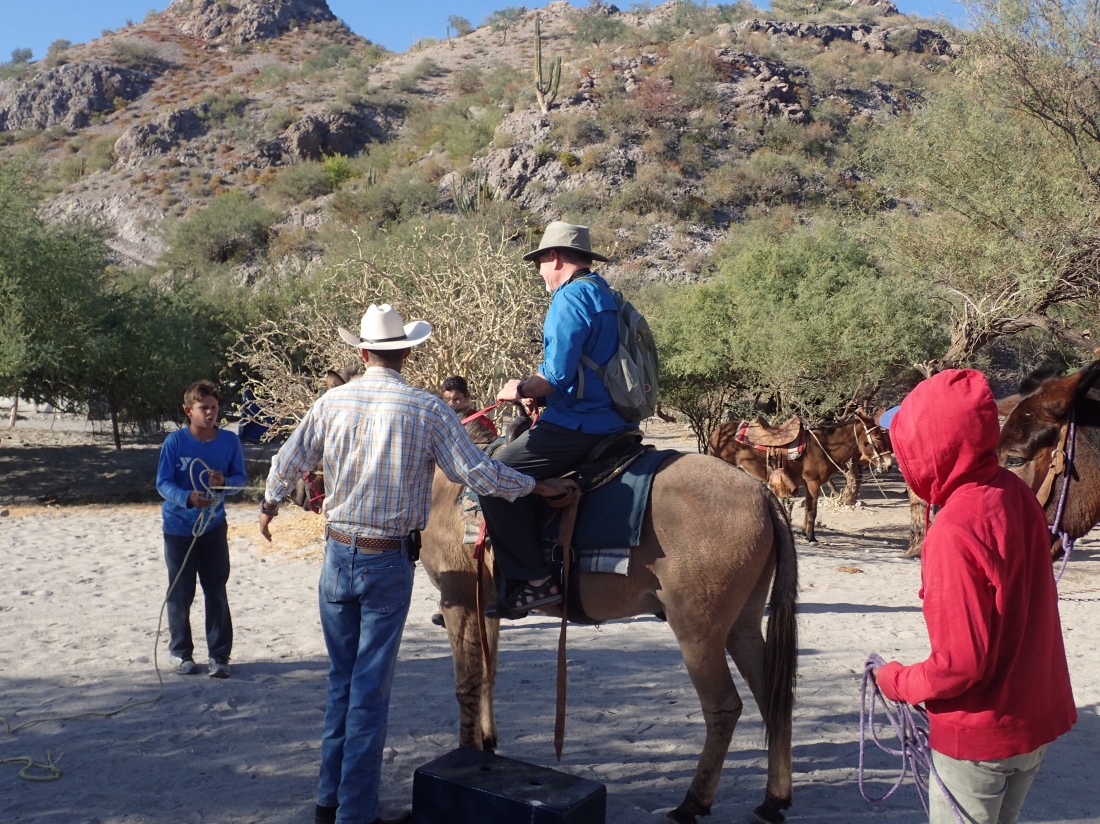 I tried to discern a rhyme or reason for how we were matched with our mules. By weight? By height? Were timid riders matched with mild mannered mules? Did zodiac signs come into play? But the cowboy has his method and no one questioned his wisdom. And after we were loaded on the mules, young boys led our mules to the side in a rather haphazard mix of nervous riders and fresh mules. 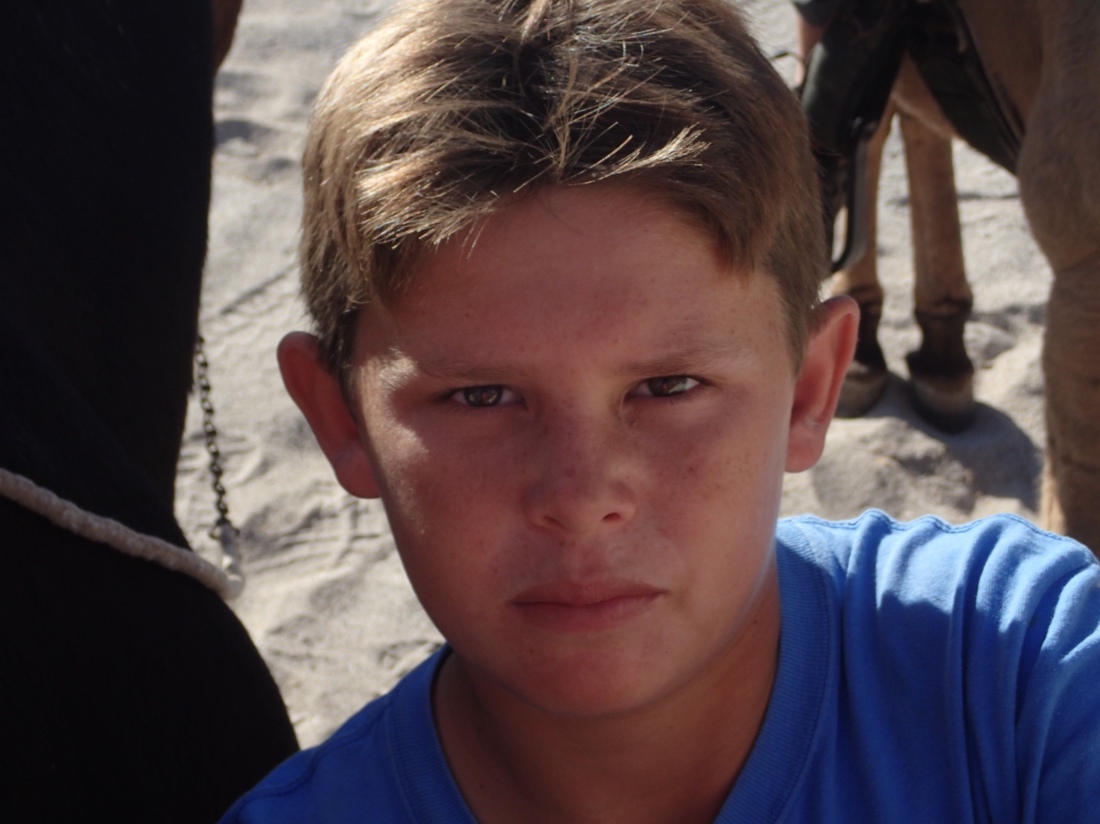 Our mule train started up a broad dirt road and I was encouraged when my gray mule moved right along to get to the front of the pack. Those initial steps were the only lively ones out of him. After that he had to be strongly urged to keep up, and picked up speed only to prevent the mule behind us from passing. Uphills were a real struggle. But that happened later.

Initially the path was wide enough for a car and the views of the Aqua Verde Bay below us were spectacular. I began to feel brave enough to take out my camera. 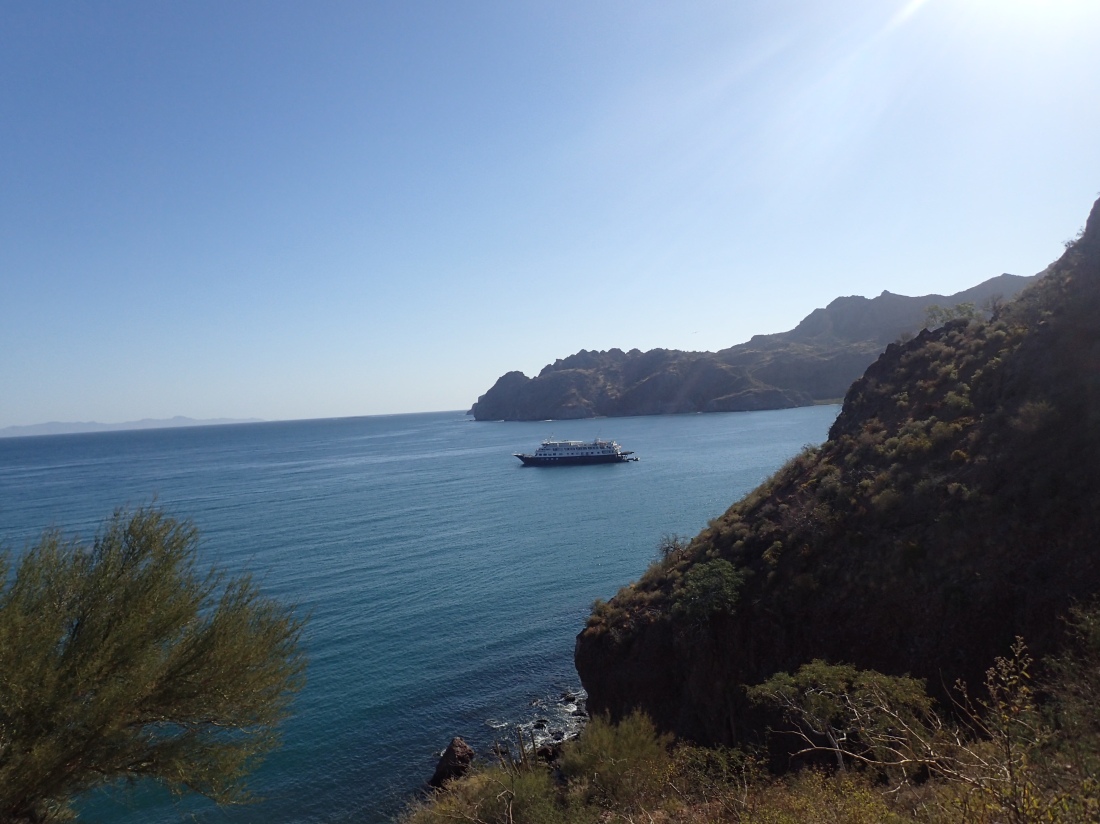 I got feeling pretty comfortable, swaying and rolling to the easy gate of the mule. Figured I looked pretty competent, too. Felt sort of like an adult version of the pony rides at the zoo or at a carnival. Clearly, I thought to myself, we had made the right choice to go mule riding. 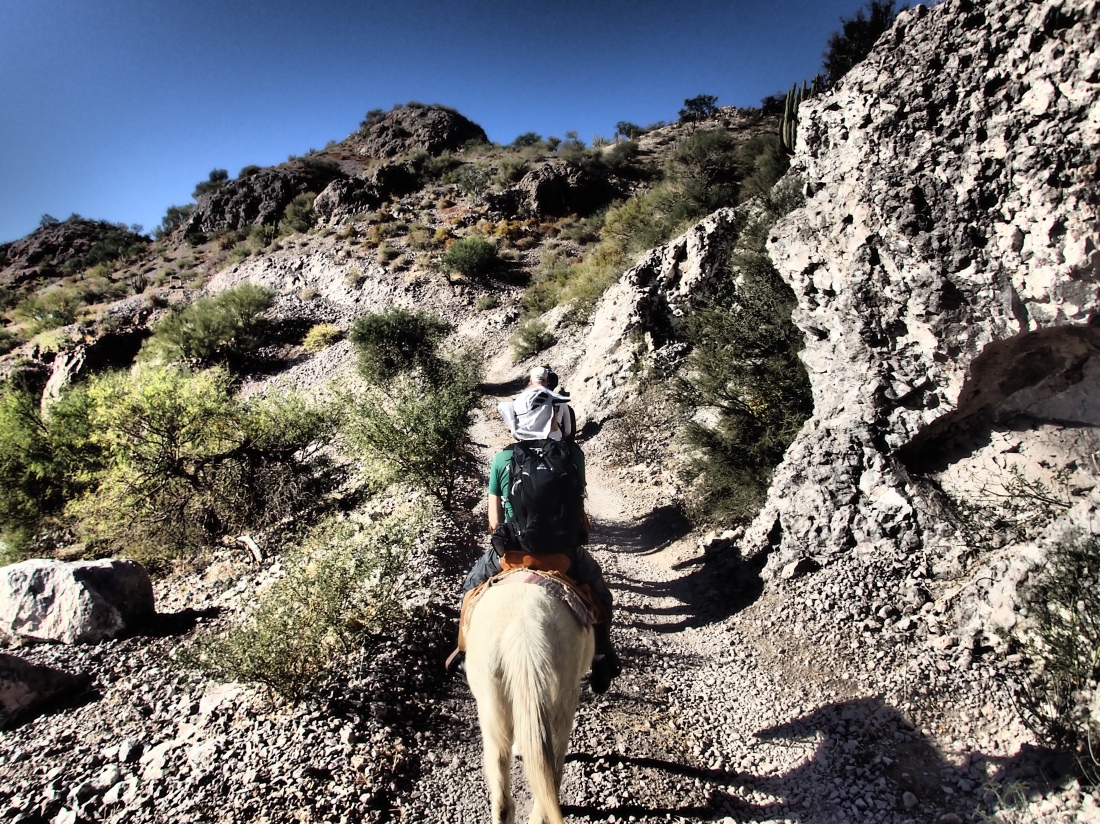 But as the reached to ridge line, the path narrowed. And the distance to be covered was revealed. 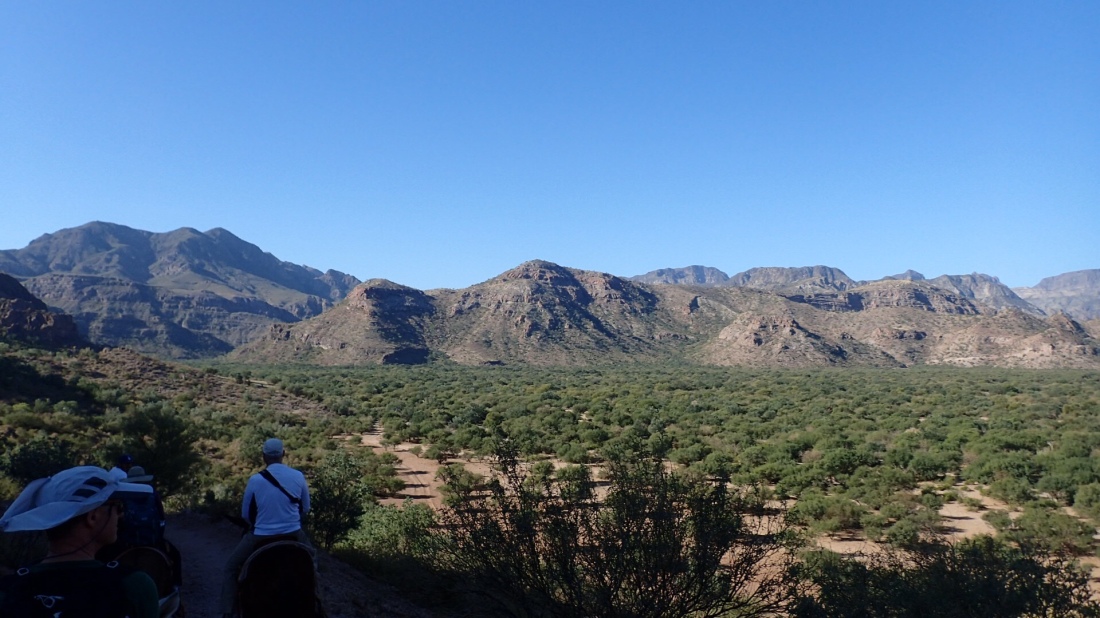 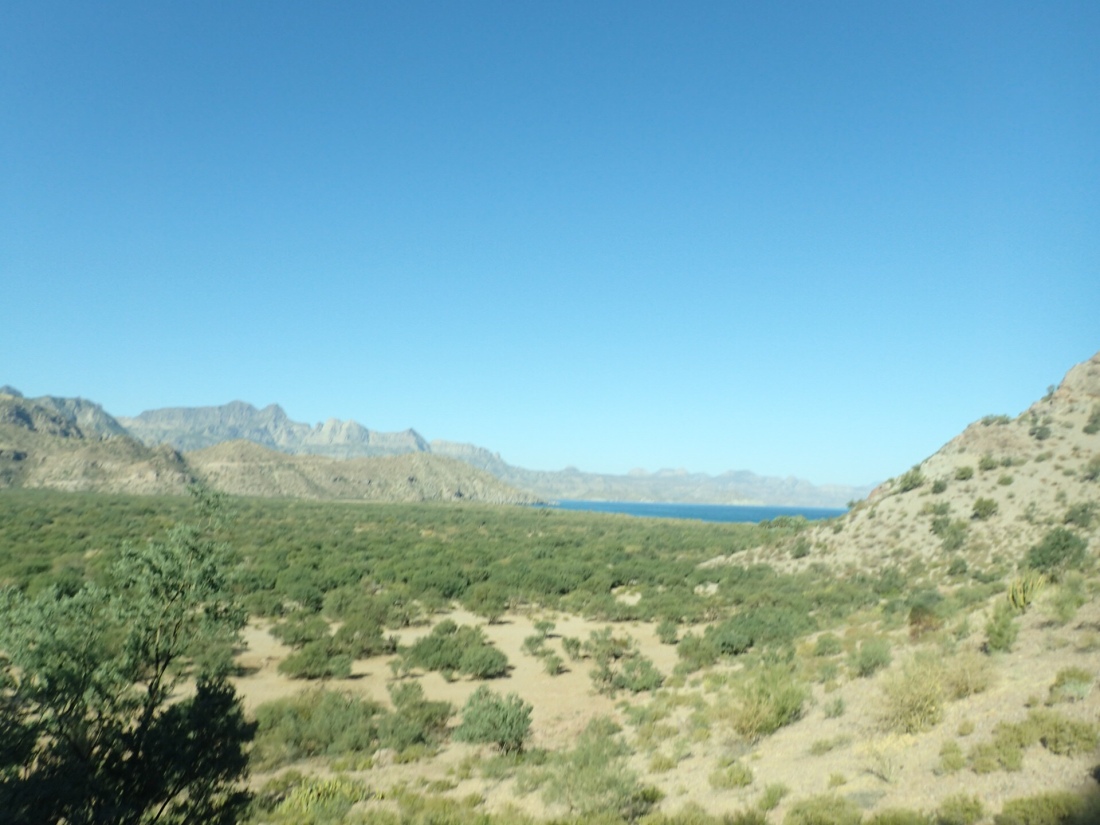 As the mule made its way through the brush on the valley floor, it became clear any control I thought I had of this mule was just an illusion. He knew the route. He was going to go at his pace. I was, quite literally, just along for the ride. The mule in front of us made that even more abundantly clear as he stopped at each bush that caught his fancy for a snack. 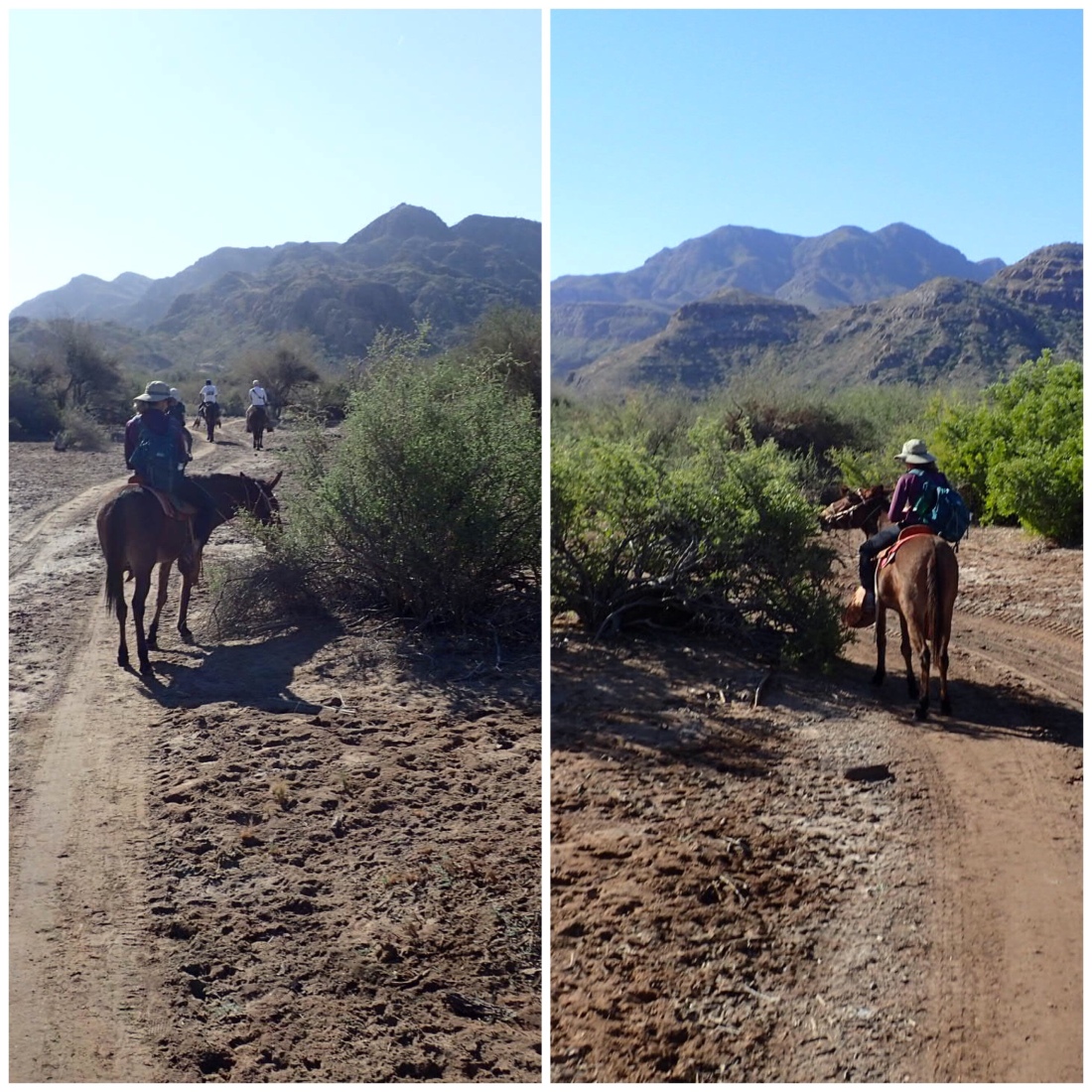 Stubborn as a mule is not an inappropriate phrase.

A small flock of turkey vultures sat on the ground not far from our mule trail, not the least bit disturbed by our presence, perhaps waiting for an errant rider to fall off a mule. 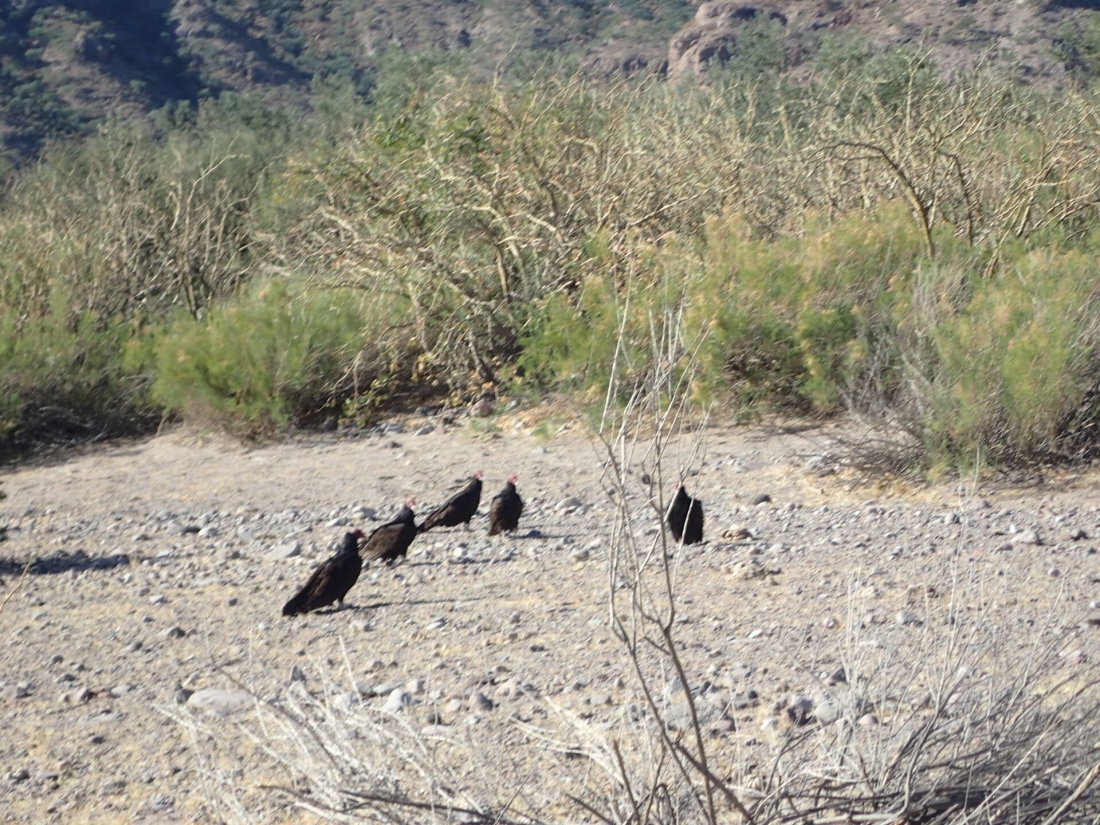 Not long after passing the vultures, I became uncomfortably aware of my sit bones. I had always thought I was well padded, but was discovering my natural padding was not quite where I needed it for this mule ride. And while the scenery remained gorgeous, I began to worry the end was not in sight. Just how long is a two hour ride? 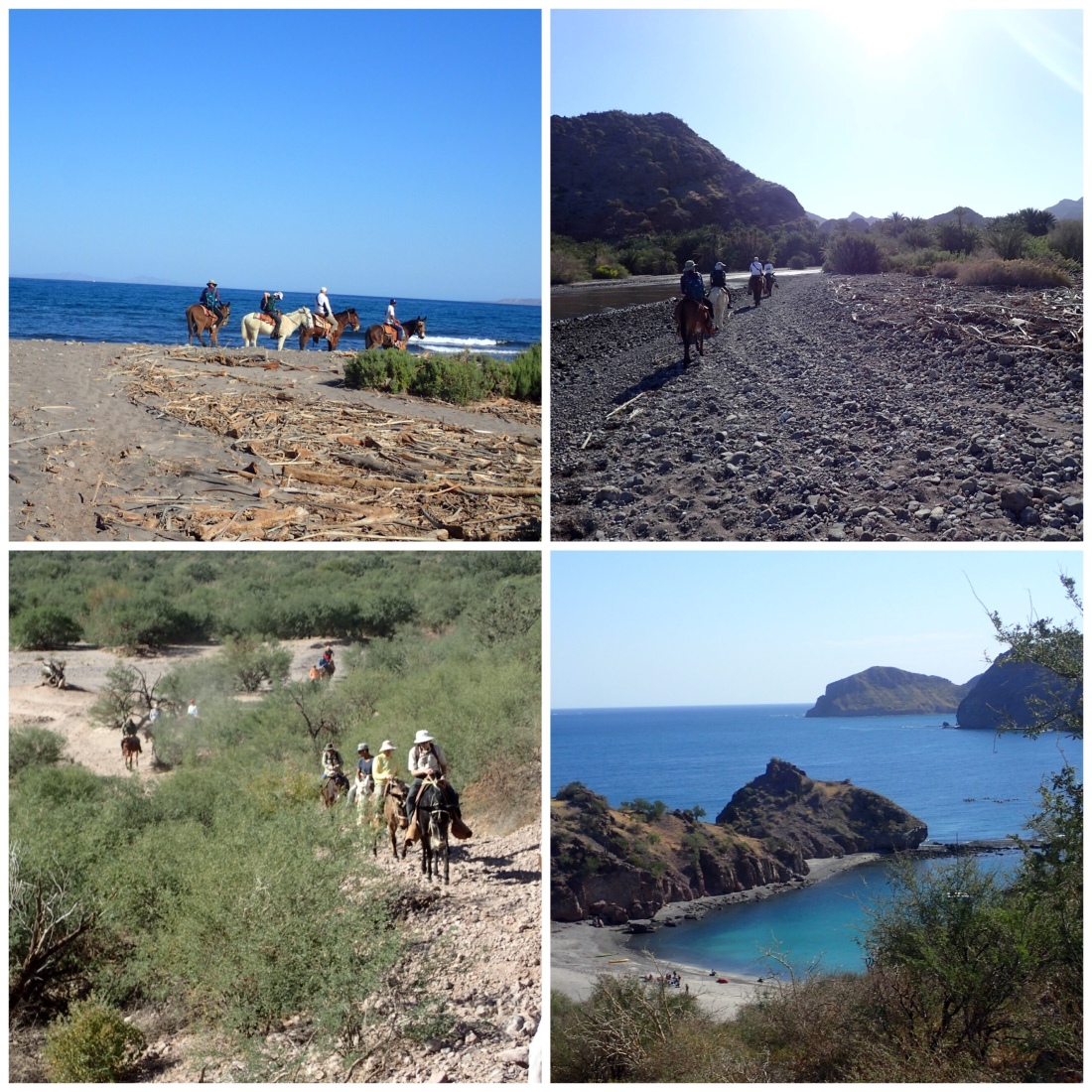 The final stretch came when the Aqua Verde Bay was back in view. We stopped at the top of the ridge and our cowboys tightened the cinches on our mules. 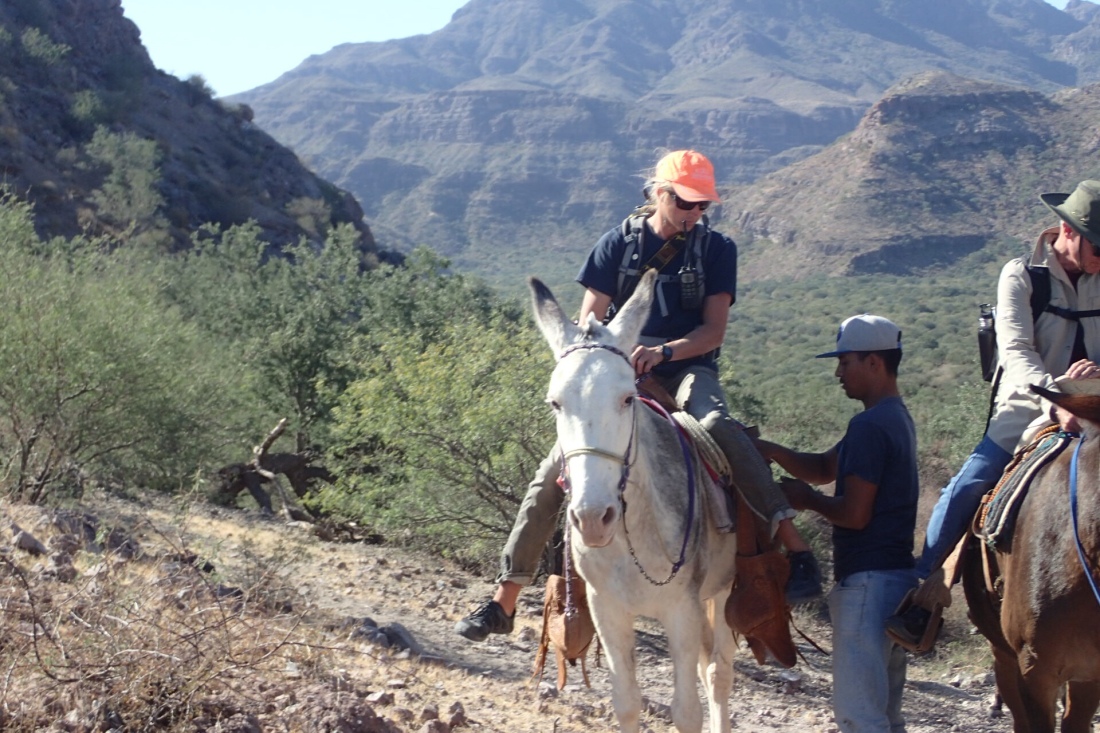 We had been instructed to lean back on steep descents. At this point I began to worry if my legs would support me when I finally did get off. But I leaned back and hoped for the best. As a side note, our guides hopped off their mules and lead them down the steep terrain. What did they know that we didn’t? No pictures here; I was too busy holding on. 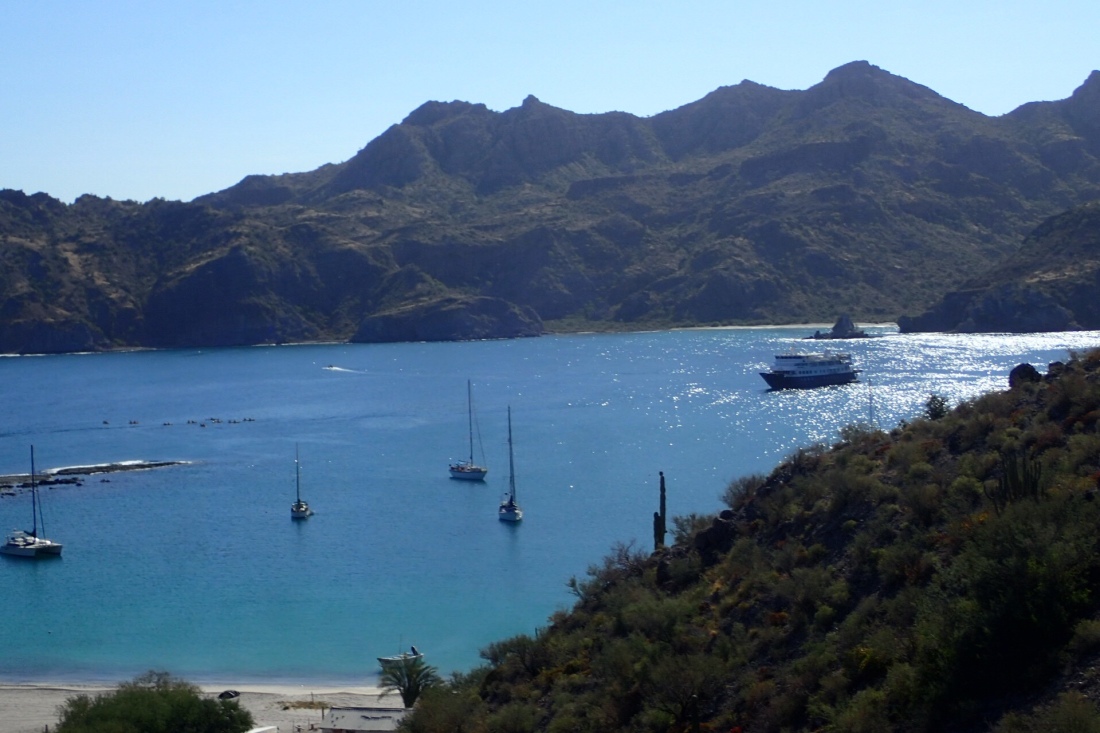 The good news is none of us embarrassed ourselves by falling off. And while we all walked a little funny for the first few steps, we were able to move. The real soreness didn’t set in for a couple hours and for days later I was rather painfully reminded of the fun from my one and only mule ride. 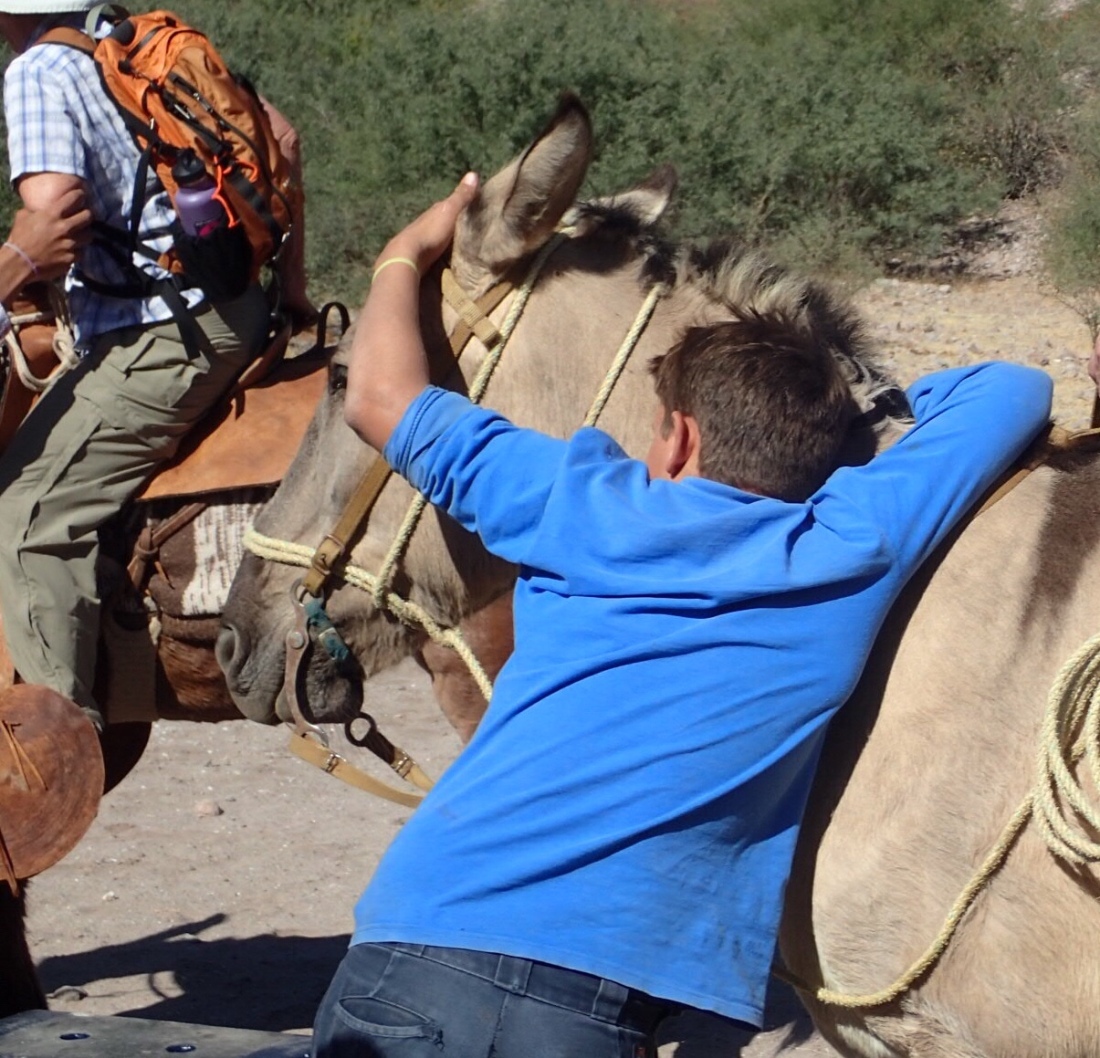