Some people think the only reason I travel is for the food. And what’s wrong with that? Food is culture and by focusing on the food, I’m embracing the culture. Most of the time I don’t think about it and just enjoy the experience of shopping, cooking and eating the food where ever I am, although it is a harder argument to make when I am only hundred miles from home.

Food markets, particularly outdoor farmers markets have always captivated me. Going through my old slides, or more recently my digital pictures, ripe tomatoes, unique fruits and vegetables, bright-eyed fish dominate. The green cauliflower in Sicily, the maroon mangosteens in Kauai, stall after stall of mushrooms in Provence, demanded to be carried back to our temporary home and served for dinner.

My motivation to cook is not inspired only by the beauty of the food markets. I do get tired of restaurant food (even when it is good) and the whole restaurant scene. “How are your first bites?” from my server totally annoys me. Plus there are rarely enough vegetables and too often they’re just boring. My motto has always been that life is too short for bad food and too often touristy places offer beautiful views but just so-so food.

So we choose whenever possible to rent a place with a kitchen for at least part of our trip. And that often comes with its own set of problems. Rental unit kitchens usually have a weird collection of dishes and cookware. Knives are often mismatched or are a very poor quality set and always dull. My other favorite tools — a micro plane, garlic press, good set of tongs — rarely are included. So I’ve learned to bring my own or improvise.

For long weekend trips to the ocean or mountains I pack a travel set of good knives I gave Peter as a Christmas present years ago. (They go in checked bags when we fly). Worth every penny I spent. We sometimes even bring our espresso machine which we bought on eBay for $25. Okay, that is over the top…but in Kauai for a month, it saved us several hundred dollars and we had better lattes. I also bring my favorite spices — cumin seed, star anise, herb d’provence, smokey paprika — or which ones will match the local cuisine. Although when going on longer trips with limited luggage space my spices may get left at home. 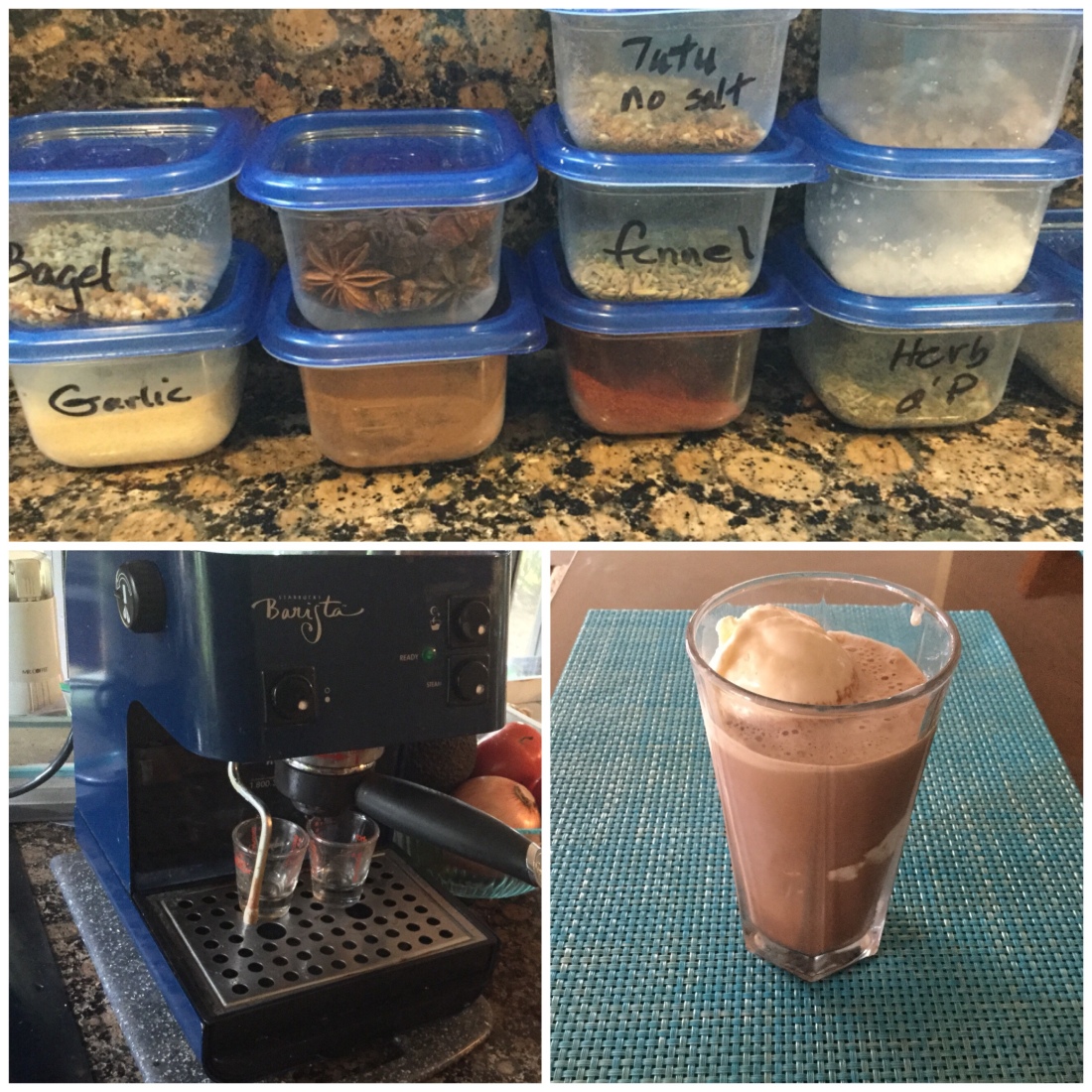 And then I buy staples the first day I get into a supermarket. Olive oil, smallest amount of butter I can find, pepper in a grinder, a good quality salt (local if possible). Depending upon where I am and what I anticipate cooking the list grows from there, focusing on small sizes . Chicken broth concentrate, flour, sugar, soy sauce, mayonnaise, good quality red wine vinegar, plus the paper goods I’ll need and zip lock plastic bags. 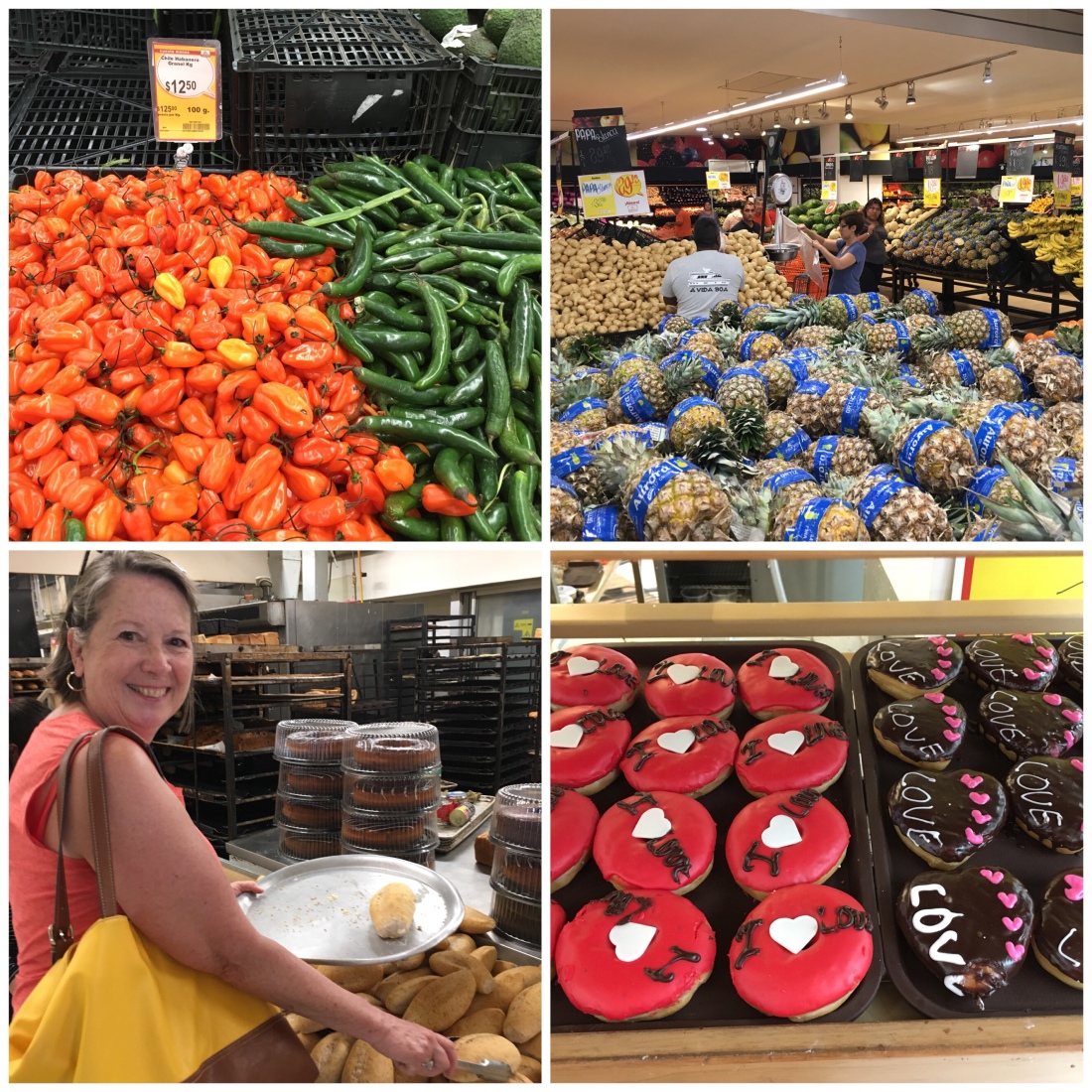 Once in my temporary kitchen I know I’ll have to make some adjustments. If I have a cheese grater, but no garlic press, I rub my garlic cloves across fine section of the grater. A crummy pair of tongs? Wrap the gripping end with rubber bands. It’s harder to deal with the flimsy pots and pans.

And if there is a thrift shop close by, I always check it out for additional kitchen towels (can never have enough), glassware (surprisingly often rental kitchens don’t have wine glasses) and serving pieces. Guess most visitors aren’t there to cook three course meals. Or I cruise local flea markets or the inexpensive street markets often attached to farmers markets. My favorite casual tablecloths and the best travel souvenir I have cost about 10 Euros each at one of those markets in Provence. Just wish I had bought more.

When we are in a foodie’s heaven like Umbria, or Provence, of course we eat out and often a lot, particularly for lunch. We tend to cook more when staying in the countryside to avoid driving after enjoying some wine. And we eat out in the cities where restaurants within walking or subway distance are plentiful. And when we don’t take our own espresso machine we have to locate a good coffee joint to start the day. In between these restaurant stops, we still try to buy food for picnic breakfasts and lunches so we get to play with the local cheeses, cured meats and bread that tantalize us. Eggs and toast in a cottage near Loch Ness where our landlady gave us farm fresh eggs. Take-out roast chicken in Cefalu from a shop the local haunt.

Buying our food also brings us into closer contact with the locals. Our butcher in Apt, Provence who explained in detailed French how to cook a roast we purchased. The young bread peddler in Lourmarin, an underemployed college graduate, helping out her immigrant father. The shop merchant in Croatia shared her truffle recipes with us.

Food is the one piece of cultural heritage that seems to hang on from our immigrant past long after the language and other customs have faded away. Why else do I cook krumkake and meatballs at Christmas based upon a recipe from a Swedish grandmother I never met? 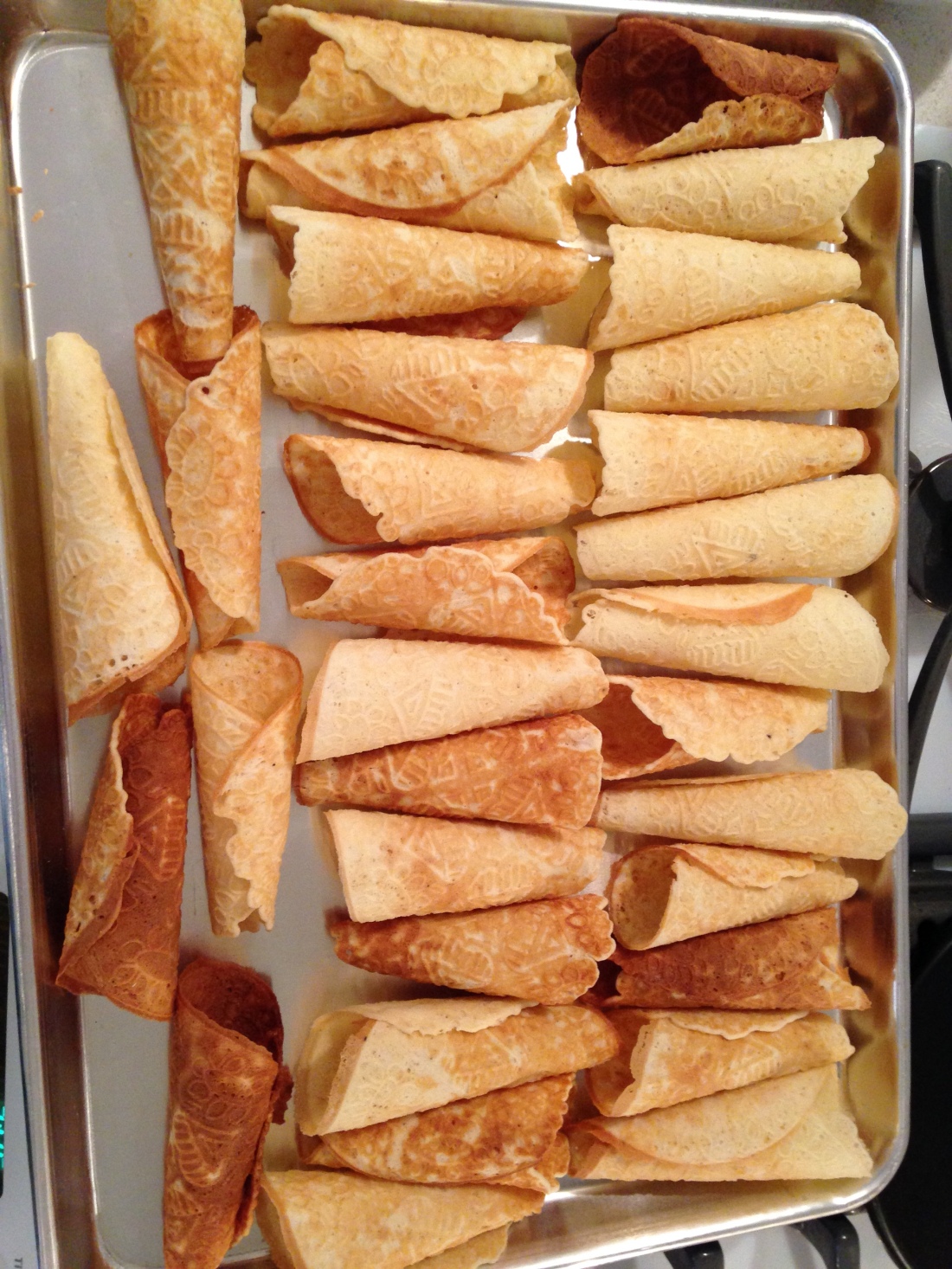 Anyone who travels to Italy should be thinking about food. Pasta, pizza, fresh tomatoes, and good wine. Sicily is a bit different. For sure, there is plenty of good food to be had; it just doesn’t all fit into what we think we know about food in Italy.

The food in Sicily reflects the history. The Spanish brought tomatoes, prickly pears and corn. Arabs brought citrus, all kinds of citrus, nuts and couscous. Greeks brought olives and grapes. Add those ingredients to the Roman cuisine and you get Sicilian food.

Of course, there is pasta. In fact, some think Sicily invented dried pasta. And given that Sicily is an island, lots of the pasta comes with seafood (for the record, I’ve been to lots of islands, however, where fish has been fished out and is hardly available). Pasta with sardines is traditional. Pasta misto mare (pasta with mixed seafood) is on most menus. Pasta with mussels or clams tempted us. Pasta Trapenese, a wonderful pesto sauce of almonds, tomatoes, garlic and eggplant, available only on the west coast, wowed us. With breadcrumbs in Erice may have been the best. But most restaurants offer only a handful of Sicilian pasta dishes, heavy on the seafood. The pasta dishes Americans know, Bolognese or traditional pesto, are rare.

Squid came grilled or fried and octopus was often offered as a salad. Couscous with fish reflects the Arab influence on Sicily. And like many of the fish dishes was dominated by the canned sardines or anchovy flavor that doesn’t appeal to every palate. Appetizers or antipasti also lean heavily on fish.

Insalata mista was a staple for us, often the only fresh vegetables we saw on the menu. Usually local lettuce & arugula, cherry tomatoes and corn. Yes, corn. Sicilians apparently put corn kernels in their green salads. And sometimes add mozzarella and/canned tuna. The other vegetable dish we saw on almost every menu was caponata, a mix of sautéed eggplant, tomatoes, zucchini, garlic and olive oil. It ranged from outstanding to very good, and was usually offered as an antipasto, more rarely with meat..

We’re not big into sweets, but generally enjoyed the couple we tried. Heavy on the use pistachios or almonds and lighter on the sugar suited us just fine. And, of course, gelato. Pistachio gelato has a rather unappetizing color, but the taste is divine. Cannoli still on our list to try, but only with riccotta.

As for wines, Etna red wines were the best. We drank the Trapenese simply because we were there. Stick with Etna wines.

Sicily seems to offer fewer farmers’ or peasant markets than we saw in Tuscany, Umbria or Provence. Instead, particularly in the northeast, small trucks sell farm fresh produce. What we saw there surpassed in variety anything we saw in the restaurants. A pale green cauliflower, not romanesco, but shaped like our traditional cauliflower. Several kinds of green beans, including romano. And several kinds of summer squash. But none of these made it into the menus.

Pomegranates are big, particularly in western Sicily. A symbol of fertility and bounty, many small towns had stands set up to squeeze you a fresh glass of juice, sometimes mixed with oranges. That, too, is on our list to try.

BTW, do not miss the arincini, the deep fried rice cakes, often in a cone shape.  We met a woman in Rome going through passport control who told us the best arincini are in Taormina. So following her advice we tried them there. And in Cefalu. And in Trapani. Basically they fall into two categories, great and good. Fresher is better. Beware of the places that have them sitting out on display and then heat them up for you in a microwave. They’re just good. We learned to prefer the meat variety – a stuffing of beef, tomatoes and cheese. The other option is ham and cheese which seemed bland. One was often enough for a light lunch.

Espresso! Espresso. Don’t know how the Italians do it, but without a doubt the best coffee we’ve had anywhere. From road side gas stations to uptown restaurants, coffee rocks.

When it come to food, perhaps the best advice is a sign we saw in Marsala: