You’re nuts! Suicidal! Sicilian drivers are crazy, the worst in Europe! The roads are awful! The cities are a nightmare! You’re taking your life in your hands….

We heard it all prior to our trip to Sicily. Despite the dire warnings, we chose to rent a car because many of the big tourist attractions, including the best archeological sites, are in remote areas. And we wanted to spend some time in rural Sicily. You can’t do that very easily on public transportation.

Like most stereotypes, Sicilian drivers included, there is a kernel of truth. Yes, Sicilian drivers are more aggressive than their American counterparts (maybe New Yorkers excluded), but certainly no worse than drivers in the rest of Italy. And we never experienced the terror of a big Mercedes or BMW barreling down on you at 120 mph, lights flashing telling you to move over fast, like we did every few minutes on the German autobahns.

We noticed, however, there seem to be some “unwritten” rules of the road in Sicily.  They can unsettle the non-Sicilian driver, but they are mostly harmless…

–parking on the sidewalk or curb, nose in, is ok as long as cars and pedestrians can sort of get around you 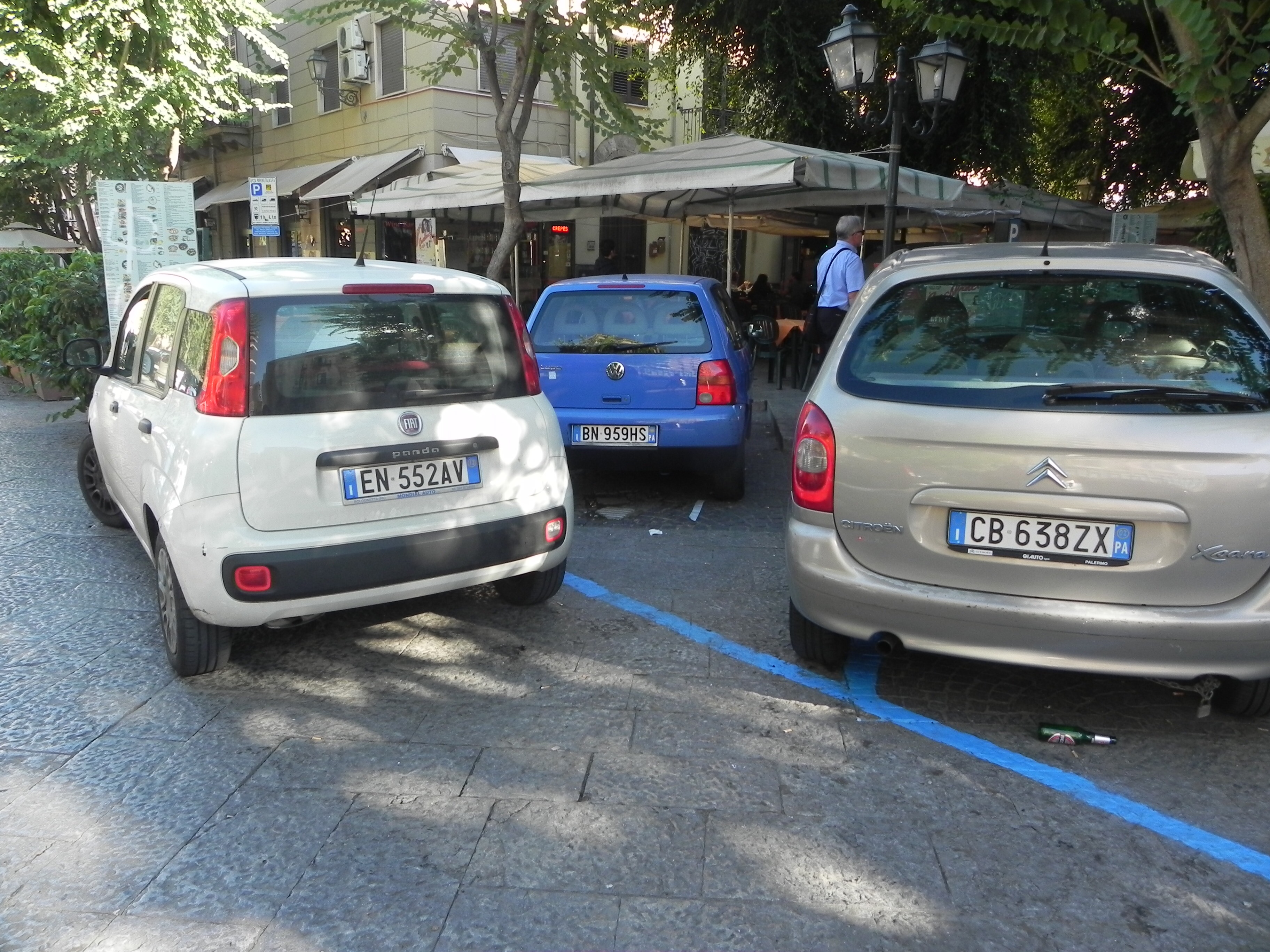 –it’s okay to pull to the side of the freeway for a quick picnic, or to stop on the shoulder to snap a picture

–motorcycles and scooters always have the right of way, and can create their own lanes, including on sidewalks and in pedestrian only zones

Still, using a little caution and common sense, driving in Sicily is not a problem. And it got us to some truly beautiful and remote places, far off the tourist routes. Here are some of the lessons we learned on our two week drive around Sicily that helped us reduce the anxiety about driving.

–Consider taking the full collision/damage coverage when renting the car.  I know it’s much more expensive (I never do in the US), but knowing that any damage to the car is covered really helps put your mind at ease.  If you don’t, certainly be very aware of what your policies or credit cards will cover.

–Get a small car. Really, the smaller the better. In the towns and villages the roads are narrow and parking is often very hard to find.  And squeezing past parked cars and dodging motorcycles is easier in a small car.

–Get a good map or GPS system.  We took a picture of a very good road map on the IPad of the day’s trip. You could enlarge it if necessary, you weren’t struggling with a large paper map in a small car, and you never needed a phone or Internet connection to view it. But know that once you get into the warren of small streets and one way alleys that make up most Sicilian towns, any map is useless. You are much better off following the roads signs that tell you the way through the town to the next village, and knowing almost any mistake can be corrected.

–Be sure your hotel, B and B, or Airbnb has parking, preferably secure parking.  Finding on street parking is very difficult in most towns and often limited to residents with permits.

–Recognize that you can never leave anything of value or that even remotely looks like a bag or purse in a parked car. Car prowling and break-ins are common in Sicily, in fact, everywhere in Europe. Better not to tempt fate.

–Expect rural roads to be in worse condition than at home or in northern Italy. Lots of potholes, roads under repair. Particularly in the mountains, roads have unexpected dips of alarming size from erosion, or earthquakes or bad construction. This is a poorer part of the country and the roads show it. Be aware that the island is largely agricultural, so the occasional herd of sheep or cows may block your way. Also, Sicily is very hilly, even mountainous. Great views, but narrow, steep roads with dramatic drop offs.

–Avoid driving in the largest cities, like Catania and Palermo, and leave the driving to professionals—bus drivers, taxi drivers. I would never drive in Manhattan, central London, or Rome if I had a choice. The same applies here.

–Pick up and drop off the rental car at major airports. They are easily reached by well-signed highways. Also, within Italy, typically there is no drop-off charge so you can pick up a car at the Palermo airport and drop it off in Catania at no extra cost. That means not having to double back, giving you more time to tour.

Finally, take a deep breath. You are on vacation and getting lost or making a wrong turn is part of the adventure.  At least that’s what the navigator says when we get lost.