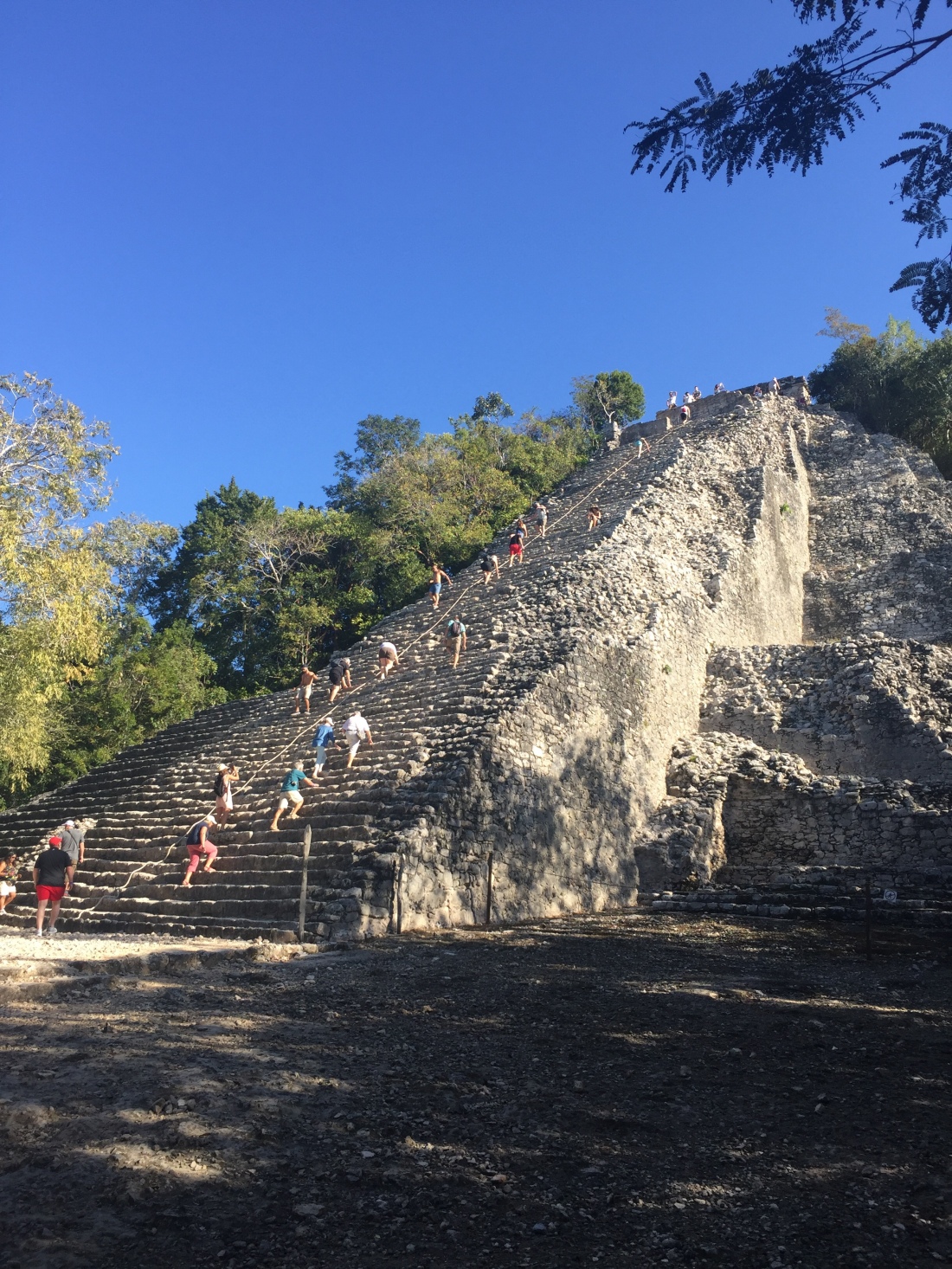 For many people hopping on a bike is a frequent occurrence. For us, not so much. But the size of the Coba Archaeological Zone almost requires riding a two wheeler. You could walk it, but the distances between sights can be several kilometers. A third option are the pedicabs, but those pedicab drivers were almost as scary as the crazy taxi drivers in Tulum. So for the first time in probably 30 years, we climbed on bikes. Word to the wise: check out your bike rental. Many are in sad states of disrepair. Make sure to get one that fits.

We peddled madly, if a little unsteadily, along the gravel and hard-packed path for a well over a kilometer. Parts of the path follow roads more than a thousand years old. Our goal was to get to the second tallest pyramid in the Yucatán, Nohoch Mul, or the Big Mound in English, before the tour buses arrived and before the heat of the day. It is one of the only remaining pyramids you can still climb and we were told that will end this year.

Hard to imagine as you wander in and around Tulum that the Yucatán Peninsula was once home to millions of Mayans living in a collection of cities where the jungle now grows. Nearly two thousand years ago, Coba had been one of the largest cities and the center of trade with a network of roads going out for miles to all directions.

Our first sight of Nohoch Mul was intimidating. It was big. Tall. Steep. Almost immediately we realized two of us were wearing flops, not the best decision since we had hiking shoes back at our vacation condo.

But the crowds were still sparse and a thick rope had been attached to the pyramid to aid our ascent. We knew going up would be the easy part. Coming down, another matter. When we reached the top, a stranger high-fived us in celebration. We understood why.

From the top, you could see places where the tree tops sat higher, almost like they grew out of small hills. In reality, each bump was another temple or pyramid that had been absorbed by the jungle. 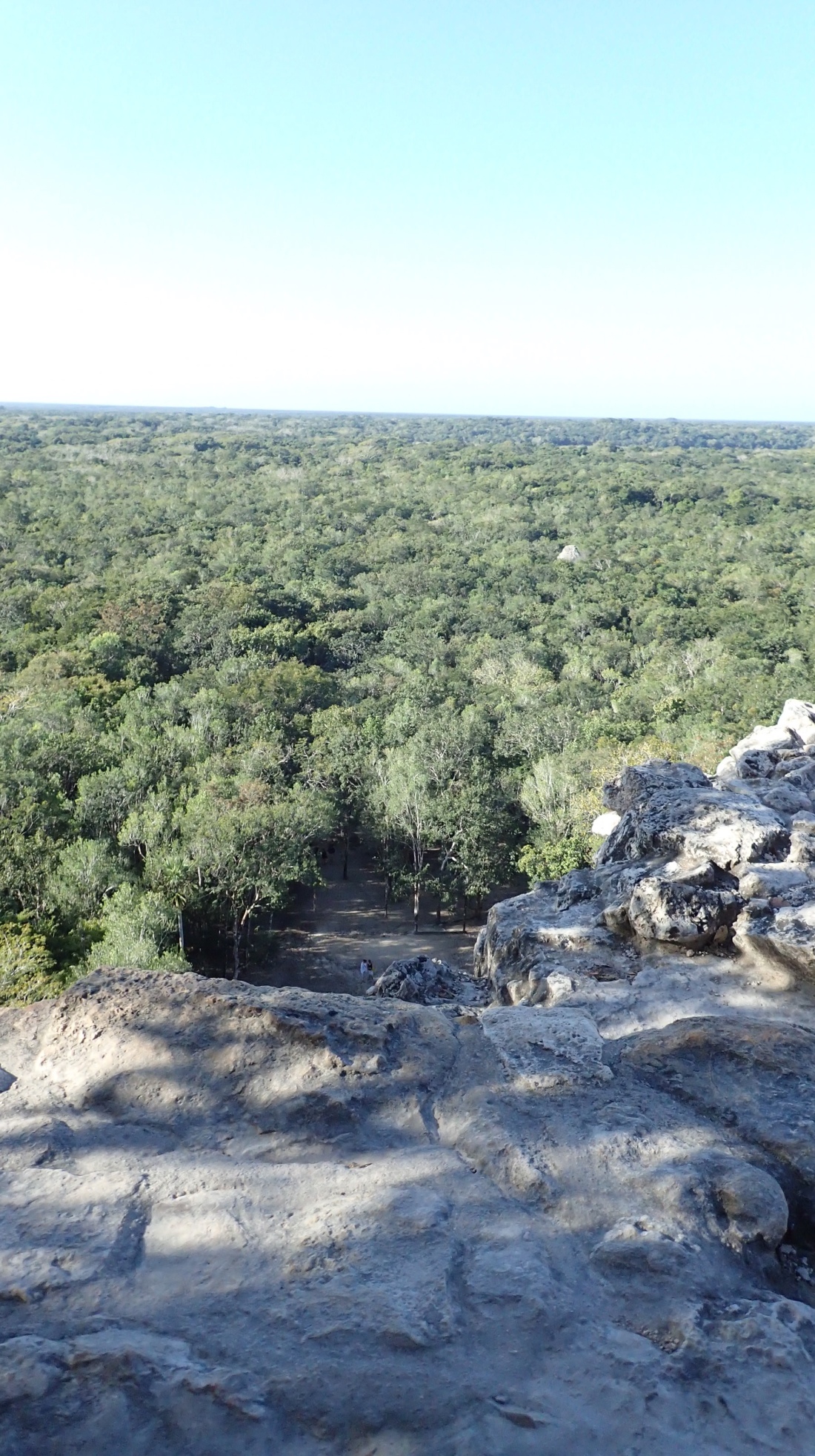 All three of us made it back down safely with no misadventures. We over heard a guide explain the technique — go down backwards as you would on a ladder or side step your way down, or use your bum. Do not, she said, walk down, facing straight ahead as you would handle most stairs. We followed her advice, often with using the heavy rope for safety.

We stood for a while at the base, watching the hordes arrive, feeling smug that by 9:40 am we had completed our primary goal. Now we could take a more leisurely tour of ancient Coba.

The site includes two ball courts for a Mayan game vaguely like basketball. Without using hands or feet, but instead using your hips, the object of the game is to get a large rubber ball through the hoops on either side of the court.

Outside of the archaeological zone, we found four men actually playing the game on the school courtyard.

We read that when the Mayans played, it was for very serious stakes–human sacrifice of the team members. It wasn’t clear to historians whether it was the winners or losers who died.

Coba is also known for two other main structures. A rare round, cone shaped structure, Xaibe, which may have been a watchtower or served a grander purpose, an observatory. Archeologists are unsure.

And the second tallest structure, La Iglesias (the church), where archeologists discovered jade figurines, ceramic vase and even pearls.

In several places, signs next to stellaes gave us an idea of what the carvings looked like a thousand years ago. Even so, it was hard to appreciate the carving.

The Tulum Archaeological Site offers a very different experience. A walled city built on the edge of the Caribbean, with well groomed open spaces and a park-like feel. And it is substantially newer, only 800 or so years old. 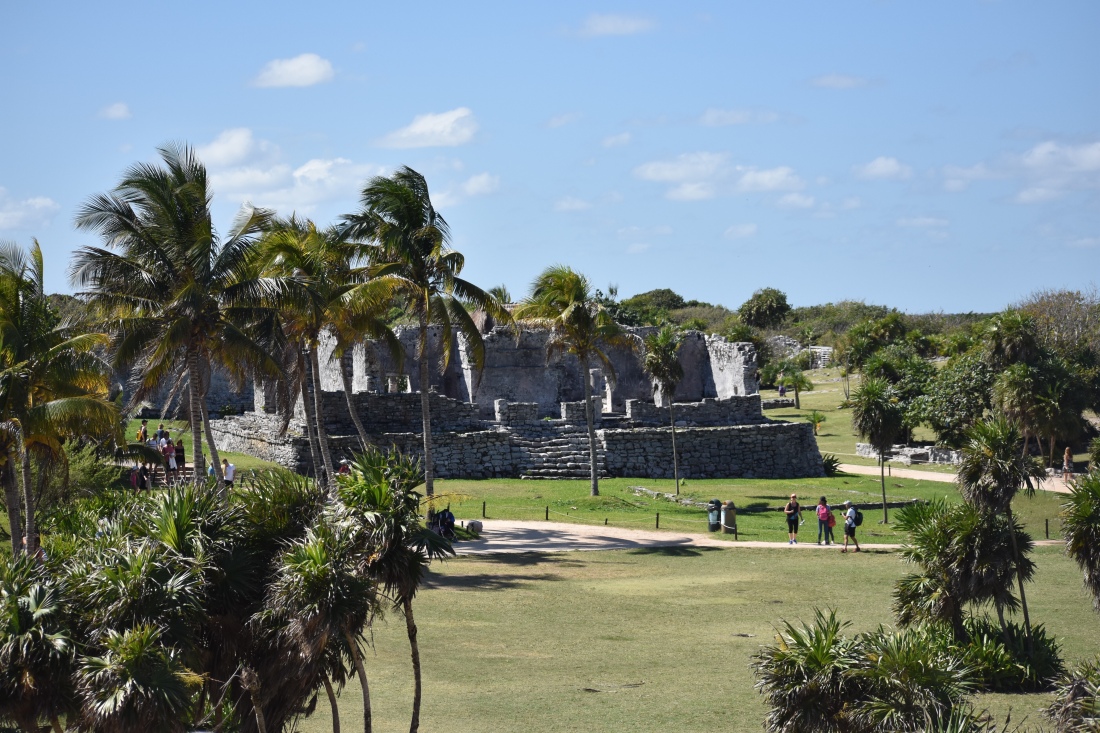 Few archaeological sites anywhere can complete with the setting and the views.

Tulum is a happening place — highly commercialized and packed with tourists. There aren’t too many other archeological sites where you can go for a swim, buy lunch and a beer and take in some history. Even with the views, the degree of commercialization can be a little disconcerting.

A couple of warnings for would-be visitors. For either site, arrive early. Crowds can be overwhelming. 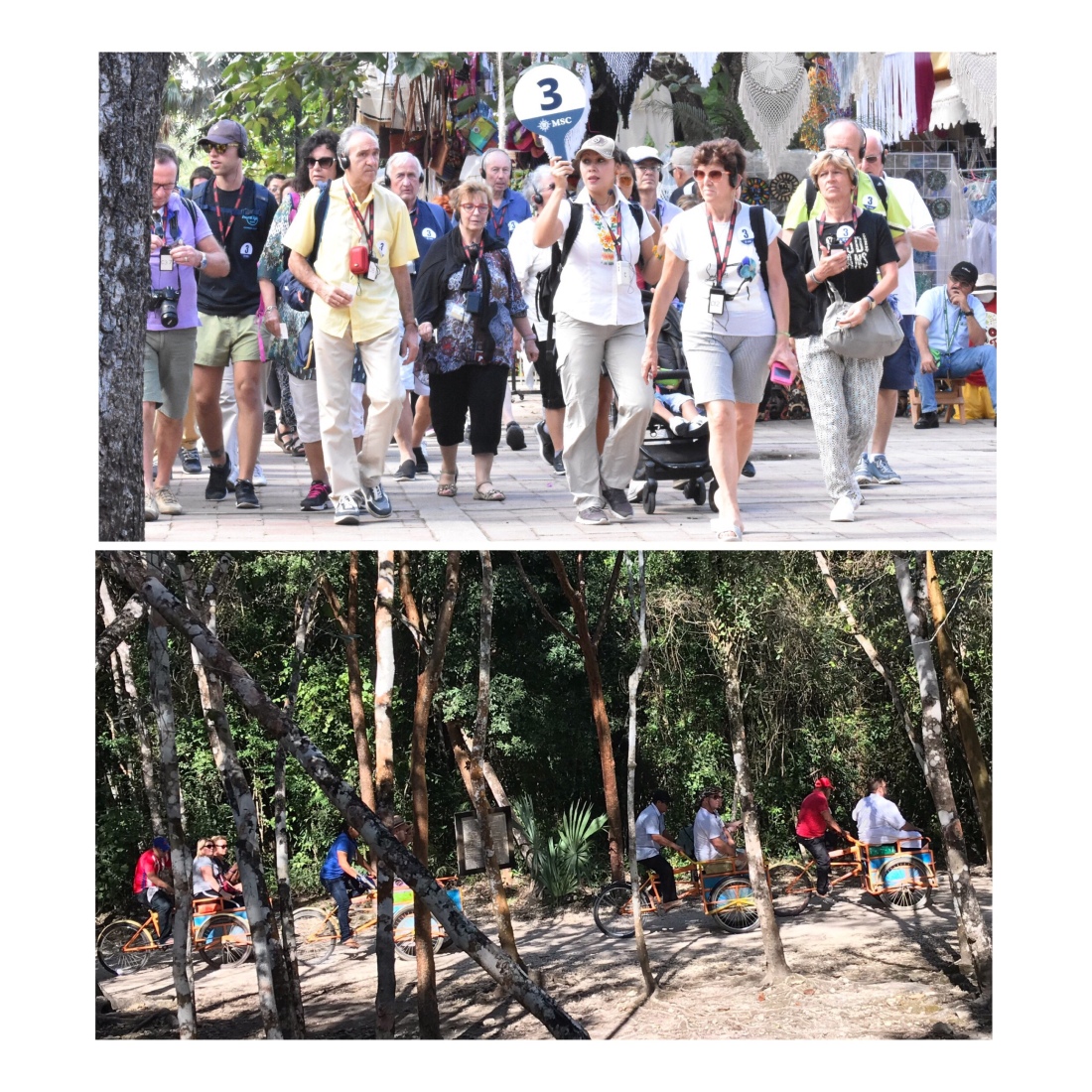 While there are plenty of places to buy water at Tulum, Coba is a little more rustic. Bring water, and insect repellant. And keep your eyes open for critters.